If you have ever visited the “Low Country,” you may have had the opportunity to try a “Low Country” boil. If you haven’t heard it called by this name, perhaps you have heard it called by it’s less appealing name, Frogmore Stew (though it doesn’t contain frog legs). No matter what you call it, it is a traditional recipe you should definitely try on your next trip to the Grand Strand. 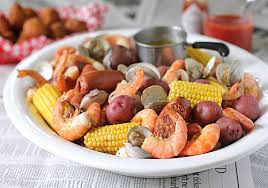 Here is a little history about the traditional dish from Coastal Living:

Once called Frogmore Stew, this one-pot wonder was created by a National Guardsman when he needed to cook a meal for 100 soldiers. Richard Gay, who learned the recipe from his family, had everyone remembering his stew. The dish was later named Frogmore, where Richard was from, by the guards who teased him about home. The postal service eliminated the name Frogmore, which changed this popular dish to Lowcountry boil.

This seafood dish is a combination of shrimp, sausage, corn, and potatoes. Great for relaxing trips to the beach, it is also easy to create for a crowd. Lowcountry boil can be served on newspaper for easy clean up. Crab legs is frequent addition to the pot. The rule of thumb here is the bigger the crowd, the bigger the pot.

So the next time you visit Elliott Beach Rentals here in North Myrtle Beach be sure to stop by Eugene Platt’s Seafood and pick up a low country boil, or as this writer prefers “Frogmore Stew”, for your entire family to enjoy!